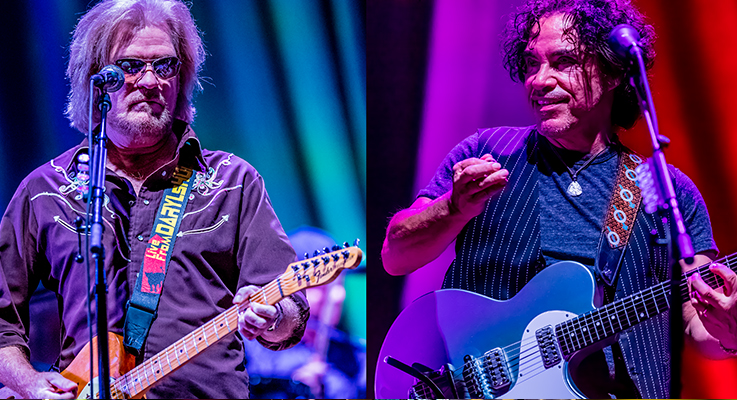 “It actually wasn’t supposed to be on the album, but I’m glad we did it, because it’s one of the greatest rock and roll songs of all time…”  Daryl Hall giving an intro to their cover of the classic Righteous Brothers hit, “You’ve Lost That Lovin’ Feelin'”.  Along with his partner, John, Hall and Oates have so many hit songs that they don’t have time to get to in the span of a standard-length concert that it is the one rare cover song that they perform live, showing a respect and debt of gratitude to the record and artists that came before them.  Playing to a nearly sold out crowd of many thousands at the gorgeous Ironstone Amphitheatre at Ironstone Winery in Murphy’s California, it was only fitting that they closed out their Summer Concert Series on such a high note.  I tend to see them every year (and less than a year ago at Mountain Winery in Saratoga), and they remain one of my all-time favorite live acts.  They are such a fantastic live band, their songs in concert tend to be even better and more vibrant than the familiar studio recordings.  A full band of exceptionally talented musicians, they play so well together than little improvisational flourishes make it all fresh and immediate.  As the most successful recording duo of all time, they at once exceed audience expectations yet leave everyone wanting more because they are just that brilliant on stage.

END_OF_DOCUMENT_TOKEN_TO_BE_REPLACED

“We keep moving back now, further back to the 70s…  you guys are fans of the 70s, right?”  Daryl Hall and John Oates continued to delve deep into their catalog at their show at Mountain Winery in Saratoga on Thursday night.  With a seemingly endless reservoir of top hits, the number one duo of all time were in a special groove.  I’ve always counted them as one of the top live acts of all time, and every time I see them play I feel that sentiment more strongly.  As incredible as their studio cuts of each song are, they come to life in such a special way at their live shows.  There is an element of improvisation and a kind of subconscious jamming among the band where they can riff and extend songs out in a way that makes everything fresh and new and unpredictable.  And somehow better than ever.  They usually hit Mountain Winery every year, but were missed in 2013, so it was great to have them return this year.

END_OF_DOCUMENT_TOKEN_TO_BE_REPLACED

An ongoing personal tradition of mine, I have made a commitment to try to see Daryl Hall and John Oates perform live every year, preferably at my favorite venue – Mountain Winery in Saratoga – and am happy to have been a part of that event again last night.  As readers of the Rock Subculture Journal would likely surmise, music from the 80s is the foundation for my love of popular music, and among all those wonderful artists that were highly prolific in those times, I would personally rate Hall and Oates among the very top.  Billboard Magazine rates them as the number one duo of all time for very good reason – they are simply brilliant songwriters, and have published seemingly endless hits, and their live shows are some of the best I’ve experienced.  Last night I had a great vantage point from which to take it all in.